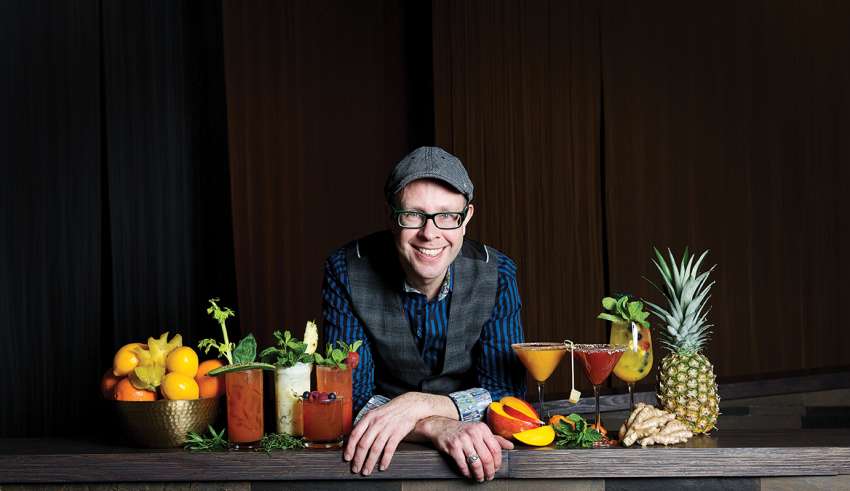 Adam Seger sits at the back of Sable Kitchen and Bar, his River North bar and restaurant that could be considered a serene monument to cocktails. The space is quiet; beyond the kitchen door lies an empty room where patrons wait for tables, but this should hardly feel like a Chicago hot spot: it’s 1:45 p.m., and not a single customer has walked through the door. Seger can hardly be blamed for the anemic midafternoon crowd; he is in the midst of his daily three-hour shift behind the bar, prepping ingredients and preparing drinks.

Today’s menu features dozens of drinks, but Seger can’t list all of them off the top of his head. So instead, he pours a shot of bourbon and drums up an impressive mental inventory as he counts off ingredients like a jazz musician finding notes on a piano: “A silver rum, Havana Club. Some lime soda. Triple sec. A little bit of simple syrup, just for sweetness.”

He drums out the sugar cane juice that goes into today’s mojitos. Then, as he turns to a metal shaker that looks like it might have been employed at Woodstock, Seger says, “this is the traditional way of making cocktails-densely packed ice, shaking it all up.” He winces at me with his pointy chin and grey, unkempt beard. “Most places today don’t even own shakers anymore.”

Seger is one of the few bartenders in Chicago who still makes drinks this way. He’s also the only one I know who can say, with a straight face, that they’re worried about their trade.

“We’ve almost lost the art of the cocktail,” Seger says, with a tone of genuine concern. “It’s not taught in any bar school or curriculum anywhere. As a result, the craft has died off.”

At the time I meet Seger, Chicago is just beginning to fall hard for cocktails. Sable made its name on them during its first six months of business, and new spots like The Violet Hour have made waves by offering a mixologist’s spin on drinks. Even the Big Shoulders Coffee chain has jumped onto the bandwagon with a cocktail menu that includes everything from a Southern Comfort Manhattan to a fancy Irish coffee.

In Chicago, it’s become chic to admire this lost art. But behind the scenes at Sable, it’s more complicated. Seger spends most of his free time soliciting recipes from old-timers who know the craft best. As a result, his “archives” are now overflowing with dozens of recipes he has collected since opening his bar.

“No one I’ve talked to wants to give them away for free,” Seger says. “It’s a lot of old family secrets.”

He’s collected recipes from retired bartenders, barmaids, and waitresses who have witnessed the drink scene change in Chicago over the last 50 years. In addition, he holds classes every other week at Sable to teach aspiring bartenders-most of whom are home mixologists or recent college grads-the art of crafting cocktails.

As he props up the Sable bar, Seger concluded by saying: “I’ve been doing this for a long time, and I want to ensure that history can be passed on.”